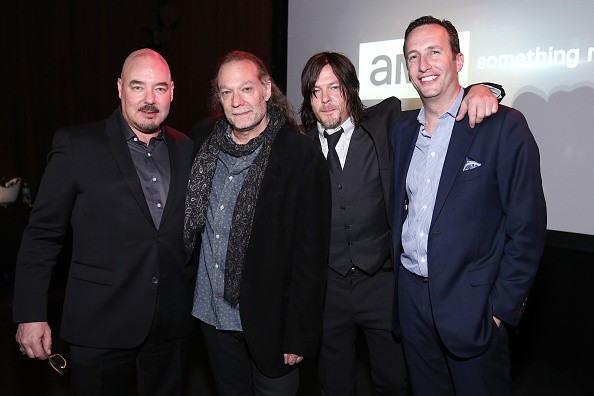 With at least five months away from next season, fans of AMC's "The Walking Dead" while away the time by trying to guess just what's in store for them in season six.

Aside from previously speculated comic book characters that might appear on the show, new names that are not from the book are also rumored to be introduced in the upcoming season. According to International Business Times, the audience can expect to see a new addition to the show's long list of characters.

A casting call for a character named Delvin has been announced by TVLine recently. The announcement described Delvin as a "twenty-something African-American" who is "cynic" and is "left so dumbfounded by displays of stupidity that it's nearly impossible for him to admit that he thinks, down deep, people are - or at least can be - decent." The report further suggests that Delvin can be TWD fans' new "possible hero."

Another non-comic book character by the name of Tucker has been reported to debut in season six. E Online reports that Tucker is "a hardworker tough guy who values fairness."

Based on how season five ended, it is still unclear as to how these new characters will enter the show. However, there is a possibility that Tucker and Delvin are just fake names created by the producers to avoid spoilers on the direction of the plot.

In the past, the producers have used decoy characters in order to hide major comic book characters from speculating fans. But a Cleveland report suggests that Tucker could possibly be Jesus (or Paul Monroe) while Delvin could be Heath. Jesus and Heath are both recurring characters in the comic book series.

"The Walking Dead" season 6 might also get some romantic action. In season 5, audiences saw a hint of romance between Jessie and Rick when he kissed her on the cheek. But throughout the season, their relationship did not blossom further than that. However, it is possible that their dynamics might develop in the upcoming season, according to the show's co-executive producer, Greg Nicotero, in his interview with Melty.

"I don't think it would be out of the question for something to spark between Rick and Jessie, because it already did," Nicotero said in the interview. "I do believe that Jessie was torn between her marriage to Pete and her attraction to Rick." Well, Rick had taken care of that at the end of season five when he shot Pete in the head.

Another romantic pairing rumored to be in the works is between Carl and Enid, as well as Morgan and Michonne based on the comic books.

A new army of zombies created by the Wolves are also possible to appear on the show. According to Nicotero, the Wolves are "basically utilizing the people that they kill as ammunition to build a zombie army."

When it comes to the show's existing characters, Morgan is set to be a major player throughout the season 6's plot. According to ComicBook.com, TWD's TV show creator, writer, and executive producer, Robert Kirkman spoke about the direction of the next season during a recent NAB Show panel. Kirkman suggested that Morgan will play a significant role in season 6, with Rick and Norman reunited at the end of the last.

A death of a major character is always possible, according to Steven Yeun, who also appeared in the same panel. Yeun, who plays the role of Glenn in the series, says, "The way that we make the show, the writers and everybody really want to focus on making things poignant and purposeful and meaningful."

Fans can only speculate as to the future of the show. But Kirkman said that they "have no plans of slowing down."