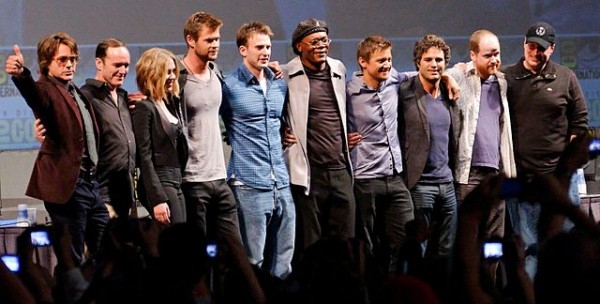 With the buzz surrounding upcoming comic book adaptations "Ant-Man", "Batman vs. Superman" and "Fantastic 4", let's take a look at the most successful comic-book adaptations at the box-office.

"Guardians of the Galaxy" is one of the best examples of a box-office sleeper hit: a brand new film adaptation of a comic book series with a lower fanbase than most of Marvel's properties.

However, thanks in large part to a viral word of mouth and strong critical reception, "Guardians of the Galaxy" ended up being the 4th highest grossing Marvel Studios production so far, with $774.2M at the global box-office.

"Guardians of the Galaxy" tells the story of Starlord, a space-based human bounty hunter who embodies most of the stereotypes of a wild child - a free-spirited retro-music lover who sleeps with a new lady every night. However, circumstances lead to him making allies with a ferocious raccoon, a double-agent space assassin, a hard-mouthed, slow-thinking ex-convict, and a living tree forming the "Guardians of the Galaxy" in order to save the world from baddie Ronan.

The film was a resounding success because of its fun humor and vibrant action sequences, and could be considered responsible for launching Chris Pratt into A-Lister status.

Before Andrew Garfield suited up for the reboot "The Amazing Spider-Man" and its sequel, the "Spider-Man" series from the previous decade, became a box-office smash and paved the way for comic book adaptations to become huge blockbuster affairs. All three movies are in the top 60 highest grossing films of all time - and for good reason.

"Spider-Man" and "Spider-Man 2" were touted as some of the greatest comic-book adaptations of all time, with "Spider-Man 2" being prasied as revolutionizing the genre for its depthy exploration of Peter Parker dealing with his dual persona.

"Spider-Man 3" was less well-received, but became the highest grossing spidey film of all time with $890.9M at the box office, as noted by Box Office Mojo. Tobey McGuire as Peter Parker and Kirsten Dunst as Mary Jane were cinema's highest profile superhero love affair at the time.

"The Dark Knight" was a perfect storm of a box-office success. With its extremely high critical acclaim, the considerable buzz for the late Heath Ledger's Oscar-winning performance, and the reputation it had built up with the well-received "Batman Begins," the film would go on to be one of the first films to reach a billion dollars in box-office.

Mostly a battle of morals and emotions between Christian Bale's Batman and his foe Joker, "The Dark Knight" dabbled into considerably darker territory than comic book adaptations of the past.

"The Dark Knight Rises" followed on with comparable acclaim and went on to gross even higher than its predecessor in the box-office with $1.084 billion.

Telling the story of Batman's fight against Bane - a criminal mastermind with revolutionary goals, vewership was bolstered by the announcement that this would be the final Batman film that will be directed by Christopher Nolan.

"Iron Man" was responsible for the revitalization of the Marvel Studios flag. Through a magnetic performance from Marvel's primary leading man Robert Downey Jr., an intelligent and politically charged story, and spectacular action set-pieces, the popular opinion is that "Iron Man" remains one of the best Marvel films ever made. "Iron Man 2" obtained a slightly more muted response from the fanbase.

When "Iron Man 3" was announced to be the capper to the series, it was expected to be a smash hit. And it was. Grossing $1.215 billion and strong critical acclaim, the film could be split into two parts. One part was an introspective tale of Tony Stark reigniting his own inventive genius. The second was a huge action set-piece with 20 Iron Man suits fighting toe-to-toe with the genetically modified foes.

"The Avengers" came at exactly the right time. The prospect of seing Thor, Iron-Man, Captain America and Hulk, whose movies had all been released in the preceding years, fighting together against the forces of evil was any Marvel fan's dream.

Sure enough, "The Avengers" broke global box-office record and would go on to be the highest grossing film ever directed by someone not named James Cameron. Its mixture of funny and witty character development, huge action scenes and incredible fan support turned it into a smash.

"Age of Ultron", which was released earlier this year and is characterized by action sequences equally as huge as its predecessor, may not have grossed as much or obtained the same level of critical acclaim, but still managed to become the 6th highest grossing movie of all time. However, it is still only the 3rd highest grossing movie of 2015 with "Fast & Furious 7" and "Jurrasic World" obtaining higher totals.