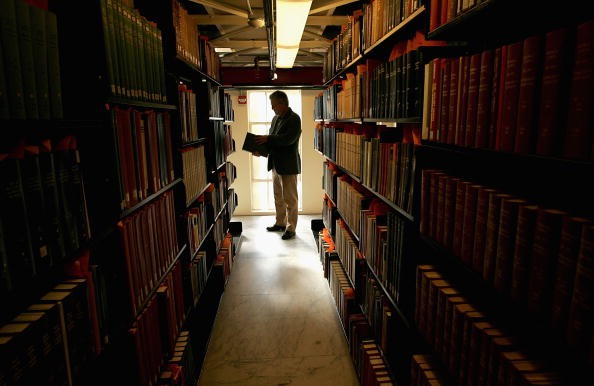 STANFORD, CA - DECEMBER 17: A man browses through books at the Cecil H. Green Library on the Stanford University Campus December 17, 2004 in Stanford, California. Google, the internet search engine, has announced a long-term project to put 15 million books from seven of the world's most prestigious libraries online and make them searchable. Included will be the libraries of Harvard, Stanford, the University of Michigan, the New York Public Library and the University of Oxford, including the Bodleian. Books and periodicals will be scanned and project is expected to take six years and cost more than $100 million.
(Photo : Justin Sullivan/Getty Images)

The world can now gawk at the oldest multi-color book, unfortunately not in the flesh. A digitized copy of the "Manual of Calligraphy and Painting," which is almost 400 years old, has been published by Cambridge University Library. It is also the first time the manuscript has been opened as it is too fragile.

"Until it was digitized, we have never been able to let anyone look through it or study it - despite its undoubted importance to scholars," Charles Aylmer, Head of the Chinese Department at Cambridge University Library said as quoted by Bustle.

But thanks to the power of technology, readers can now learn what the historical gem holds. "This is the earliest and finest example of multicolor printing anywhere in the world, comprising 138 paintings and sketches with associated texts by 50 different artists and calligraphers," Aylmer said in a statement via the university's website.

"Although reprinted many times, complete sets of early editions in the original binding are extremely rare," he adds. Fastco Design says that the 17th century artist manual has a butterfly binding, which folds one illustration into a two-page spread.

The book was created by the Ten Bamboo Studio in 1963 with the polychrome xylography technique, invented by the studio owner himself, the artist and printmaker Hu Zhengyan. Hu was among the first artists to use technique that involved shades of colors.

Fastco Design notes that the images in the book are divided into eight themes: calligraphy, bamboo, flowers, rocks, birds and animals, plums, orchids and fruit. Every image has an accompanying text or poem along with instructions on basic artist techniques.

The manual is not only regarded for its unparalleled beauty, but also its influence in the whole Chinese color printing artistry, having stayed in print for two centuries.

"The very high quality of the digital images has already led to important discoveries about the material - we have seen where red pigment was used to color inscriptions on the oracle bones, and seals formerly invisible have been deciphered on several items," Huw Jones, a member of the digitization team over at Cambridge University Library, said via the university's website.

"We look forward to new insights now that the collection has a truly global audience, and we are already working with an ornithological expert to identify the birds in the Manual of Calligraphy and Painting," he added.

Other early Chinese works recently digitized include the 19th century manuscript "The Manual of Famine Relief" and a 14th-century banknote. Those who want to check out the "Manual of Calligraphy and Painting" can do so here on the Cambridge University Digital Library.