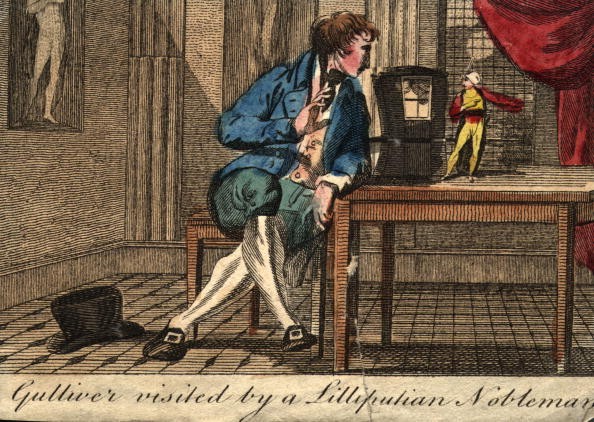 "Gulliver's Travels" was published back in 1726. It tells the story of Gulliver who traveled far and wide during his adventures. In one, he finds himself in the island of Lilliput, where he was captured by a race of six-inch tall people who spoke a language he wasn't at all familiar with.

For ages, the mystery words in Jonathan Swift's classic work of fiction were dismissed as plain gibberish or nonsense, but one scientist likes to think otherwise. According to Prof. Irving Rothman from the University of Houston, these words are in fact in Hebrew.

"When Gulliver awakens to discover himself tethered to the ground, he finds himself face to face with a six-inch Lilliputian who utters the words Hekinah Degul,"  Prof. Rothman stated in his paper published in Swift Studies picked up by Sci-Fi News.

When Gulliver was drinking two hogsheads of a liquor of what looked like Burgundy, these Lilliputians uttered "Borach Mivola" as he knocked it all back. Philosopher Isaac Asimov concluded in his attempt to make sense out of these words that these words are "made-up nonsense," The Guardian recalls.

But Rothman said that Swift, who he claimed "was an Anglican minister who studied Hebrew at Trinity College," discussed how the author made use of Hebrew. Here is how the professor explained this alphabet.

"The first is straightforward: readers are told the alphabet in the land of the giants - the Brobdingnags - consists of 22 letters. Hebrew relies upon a 22-letter alphabet, compared to the 26 letters of the English alphabet."

Rothman concluded that "Degul" is actually "flag" in Hebrew while the word "Hikinah" meant  "to transfer, impart, or give" in English. That being said, "one might deduce that Hekinah Degul pronounces a militant stance, offers a display of colors, and urges Gulliver's capitulation to the Lilliputian flag."

Rothman also said that adding "s" to "hekinah" will result to a Hebrew word that means "God or inspiration." In explaining this, he said "The Lilliputians may have thought that they were in the presence of a miraculous being, Gulliver, and sought to claim him for their own."

As for the word "baruch," Rothman suggested it is the Hebrew word for "blessed," while "mivolah," which is spelled "mivolim" in Hebrew means "complete defeat." Thus, the Lilliputians could have been saying that Gulliver is "helpless and in a drunken state."

Lastly, Rothman explained that the word "yahoo," is a variation of the four-letter holy Hebrew name of God, YHWH, which is pronounced "Yahweh" as what was already interpreted before. However, he explained that Swift used it to describe "unquestionably evil beings" with "the biblical name of God".

"The Yahoos are described as Hnea Yahoo. The word Hnea, if read right-to-left as Hebrew is read, is the word ayn, or not. Those beasts are the opposite of God and the antithesis of God," he expounded.

"Gulliver is not in any sense a Yahoo entirely devoid of godlike virtues. Indeed, Gulliver is a human being achieving saving grace, a hope not accorded to the Yahoo," Rothman continued.