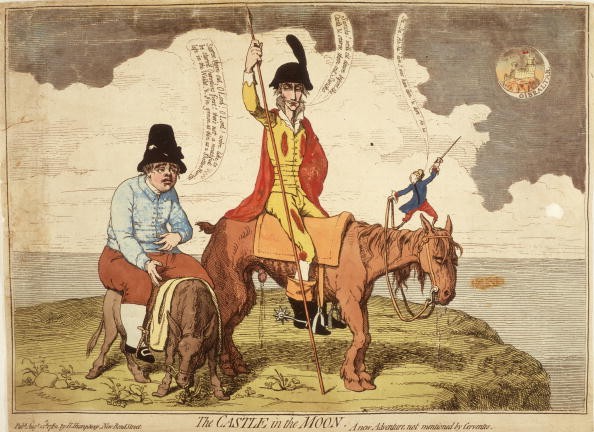 circa 1782: 'The Castle in the Moon - a new adventure, not mentioned by Cervantes'. Fictional Spanish knight Don Quixote and his companion Sancho Panza besiege the 'castle in the moon' of Gibraltar, occupied by the British. 'Sancho! We'll sit down before the castle,
(Photo : Hulton Archive/Getty Images)

A modern rewrite of the Miguel de Cervantes' classic novel "Don Quixote" is a big hit in Spain right now, but some academics think Spanish writer Andres Trapiello's edition of the celebrated time is "crime against literature," per Telegraph.

Acoording to the news outlet, the novel follows the story of a delusional budding knight known as The Ingenious Gentleman Don Quixote of La Mancha and it was first published back in 1605. Having been translated into 145 languages, it was hailed the second most translated book. The Bible is the first one.

"It was absolutely unintelligible," Trapiello told AFP, as quoted by Telegraph. "It went in one ear and out the other. There are a great many people who have not read it or who have given it up several times because it is so hard," the author added.

"They are obliged to read it in language that is not understood nowadays. They make you read it at school and lots of people have bad memories of that," Trapiello continued. He decides to resolve this by making the book friendly to contemporary readers. His edition entailed thorough research and copious changes to achieve.

Trapiello worked on adapting Don Quixote in contemporary Spanish for about 14 years. The Guardian said that he adapted it "faithfully" and "in full." His effort bore fruits as the rewrite climbed to the ninth spot on the Spanish bestseller list.

However, Madrid academic David Felipe Arranz says that it isn't at all a bestseller material but "a crime against literature." Speaking to AFP, he explained "I ask the booksellers in Madrid and they tell me no one buys Cervantes' original novel anymore because readers prefer the 'light' version."

"You cannot twist the flavor of the words of the greatest writer in our language," he added. Nobel literature laureate Mario Vargas Llosa introduced the Trapiello's version and there he said that while it "rejuvenates" Cervantes' story, it was done so that it can stay as it is too.

He adds that after reading Trapiello's version, it is likely that readers will feel like reading the original one from Cervantes. Here is what the head of the Spanish Royal Academy's series of classic titles had to say about7 Trapiello's effort.

"Any attempt to make Quixote more readable is positive. Shakespeare got forgotten for a time. For centuries no one remembered Dante. Voltaire has had his ups and downs. But Quixote has been a bestseller ever since it was published."

Trapiello says that it is much of a "paradox" how readers outside of Spain can read "Don Quixote" with no problems in translation while Spanish-speaking readers themselves won't understand it without the footnotes.