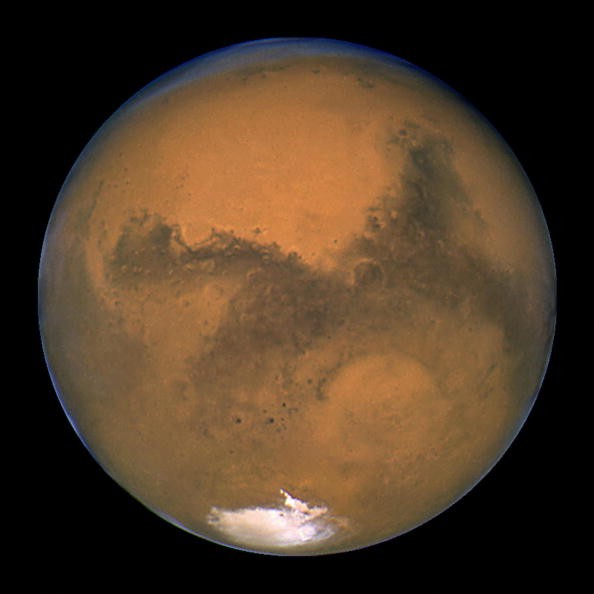 IN SPACE - AUGUST 26: This image released August 27, 2003 captured by NASA's Hubble Space Telescope shows a close-up of the red planet Mars when it was just 34,648,840 miles (55,760,220 km) away. This color image was assembled from a series of exposures taken between 6:20 p.m. and 7:12 p.m. EDT August 26, 2003 with Hubble's Wide Field and Planetary Camera 2. The picture was taken just 11 hours before the planet made its closest approach to Earth in 60,000 years. Many small, dark, circular impact craters can be seen, attesting to the Hubble telescope's ability to reveal fine detail on the planet's surface.
(Photo : NASA/Getty Images)

While humankind living in planet Mars is no more than a science fiction book for some, award-winning science journalist, Stephen Petranek, thinks that in 20 years, it will all be real. In his new book, "How We'll Live on Mars," Petranek elaborated this possibility, per Space.com.

The journalist discussed in the volume the path to that whole new world and enumerated the means that will actually get the civilization there and thrive there. He also talked about the geo-engineering process that will make Mars a suitable place to live in.

According to the report, Petranek believes that humankind has all the things necessary to be able to inhabit the planet while a "new private space race" could get them on top form. Petranek thinks that "the potential is enormous."

"The truth is that it has been possible to reach Mars for at least thirty years," Petranek wrote in "How We'll Live on Mars" picked up by Space.com. "Within a decade or so of the Apollo 11 mission that landed the first humans on Earth's moon, we could have landed humans on the Red Planet," he added.

Petranek says that with "private rocketry" comes a new opportunity "to the stars." Add to that mankind's penchant for discovery and exploration. In fact, he believes that almost everything needed to evacuate is already at the people's disposal.

But this wasn't pushed through because "We simply have not chosen to pursue the opportunity." He adds that "Nearly five decades ago we had the ability to extend ourselves into the solar system and beyond." In making this clear, he wrote:

"The backstory of that mistake is worth understanding-how a single decision by one US president stunted space travel for decades, how we might have inspired two generations of earthlings with humankind's ability to deliver on almost anything our brains can imagine."

Petranek says that mankind's move to Mars is "about to happen far sooner than most people realize, and in a nonregulated way." He believes, as per Simon & Schuster, this will happen by 2027. "How We'll Live on Mars" should help the world realize its capabilities to make that happen.

Aerospace engineer Dava Newman agrees with Petranek. She, however, after experimenting on the potentials of living in space, thinks that it will all be possible come 2030. Newman says via Popsci that "If everyone isn't talking about our journey to Mars at the dinner table, I want to change that."

As for Petranek, he also drops a caveat that his book "is also a wakeup call." While he knows that the potential is huge, "the pitfalls are numerous. The time to think is now."