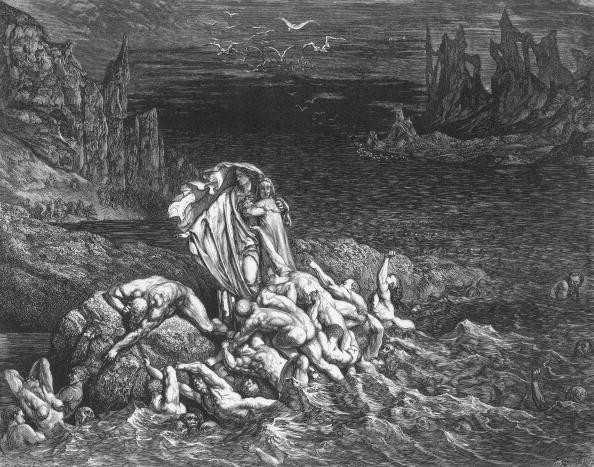 'Now seest thou, son! The souls of those whom anger overcame'. Virgil leads the author past souls writing in torment in the River Styx. An engraving by Gustave Dore, illustrating Canto VII of Dante's Inferno, written circa 1310.
(Photo : Hulton Archive/Getty Images)

Deadline has word that Warner Bros. is working on a film adaptation of "Dante's Inferno," the first part of the 14th century poem "Divine Comedy" by Dante Alighieri, chronicling Dante's journey through hell in the name of love. The movie giant purchased the pitch from screenwriter Dwain Worrell.

The flick will center on Dante's ultimate profession of love, falling through nine circles of hell to rescue his one true love. The report says that Warner Bros. is all worked up about the movie's massive franchise potential.

As per Comingsoon.net, the original poem, which starts off during an Easter weekend in 1300, has 100 cantos and is divided into three parts namely Inferno, Purgatorio and Paradiso. Dante used himself as the protagonist in the poem and depicted himself devastated by the death of his beloved, Beatrice.

Beatrice enters a deal with the devil that eventually got herself killed and sent to hell, as per Bustle. This shattered Dante's hearts into bits. But when he meets in the woods a dead Roman poet named Virgil, who guides him through the journey, he realized he can follow his ultimate love to hell.

Bustle reminds that the original poem is very much different as it is actually Beatrice who does the saving. She takes over Virgil for the rest of the journey by the end of "Purgatorio" up until the third and last poem, "Paradiso." But it looks like Warner Bros. wants to see Beatrice as the damsel in distress.

Dante ought to save her by traversing the nine circles of suffering as stated in the allegory. This includes limbo, lust, gluttony, greed, anger, heresy, violence, fraud and treachery. The quest allowed Dante to witness all sorts of agonies experienced by all kinds of sinners that descend into hell.

There are no director and actors attached to the project yet. Gianni Nunnari's Hollywood Gang and Akiva Goldsman's Weed Road were elected to produce the film. Nik Manikurve, Chantal Nong, Shannon Gaulding (Hollywood Gang) and Greg Lessans (Weed Road) are also involved.

Warner Bros. isn't the only one making use of "Dante's Inferno" as a Hollywood magnet. In fact, there is a flurry of movies that the allegory inspired. Giuseppe de Liguoro's silent film "L'Inferno," which dates back to 1911, is among the pioneering ones.

Interestingly, Comingsoon.net says that Universal Pictures has its own plan to bring the poem to the big screen with Fede Alvarez as the director. Their version is reportedly set in the early 14th century and follows Dante as a gallant love-struck hero on a mission to save his true love's soul.