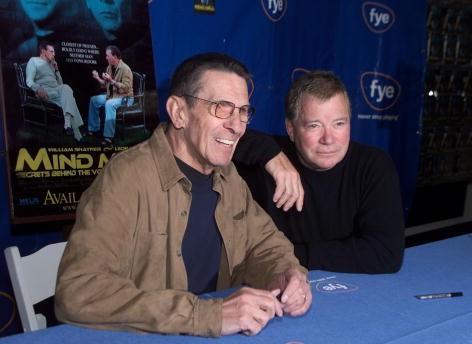 (Photo: Kevin Winter/Getty Images) Leonard Nimoy and William Shatner at a DVD/video signing for 'Mind Meld: Secrets Behind the Voyage of a Lifetime' at FYE in Los Angeles, Ca. Sunday, March 17, 2002. Photo by Kevin Winter/ImageDirect.

Leonard Nimoy's death broke the hearts of millions and his friends and fans' undying devotion lead them to pay tribute to the "Star Trek" legend in any way they can. For his co-star William Shatner, immortalizing Nimoy's legacy in a book will be the ultimate homage.

And so the actor who, along with Nimoy, is one of the original cast members of the famed cosmic franchise, sets out to celebrate their friendship by writing a book about it. Titled "Leonard: A 50 Year Friendship," the volume will dive into the two actors' bond as they rose to fame together.

According to Showbiz411, Shatner, who played Captain James T. Kirk in the original Star Trek series, is working on the biography of Nimoy and his character Mr. Spock. He intends to publish the book by 2016, with St. Martin's Press handling the distribution.

Digital Spy says that Shatner, along with his co-writer, is communicating with Nimoy's family and everyone in the actor's life that shaped his past to make the book as colorful and as truthful as it should be.

Apart from a book about Nimoy's awe-inspiring life, Shatner has paid tribute to his friend in so many ways. Not too long ago, he took time to create a giant mosaic of Nimoy's face that's made of selfies of 6000 of his fans.

Back in April, Shatner has already talked about the book during an interview with Gulf News.

"When someone dies that is a friend of yours, all those memories begin to shimmer and slide away, because you think, 'Did we kick that tyre or did we not?' and you have nobody to validate it, and gradually the memories evaporate," Shatner said.

"That's one of the tragedies of a friend of yours dying. Friendship has multi-levels of meanings -- old friendships, particularly. That's the area I would examine in the book," he continued, adding that the memories they made will be "validated" in the biography.

Cinema Blend writes that Shatner and Nimoy have been friends since they were young actors. Together, they made history and earned a time-withstanding fanbase when they started the iconic "Star Trek" series. This launched their acting career in Hollywood and this is what they are known for still.

Apart from "Leonard: A 50 Year Friendship," fans can also look forward to a documentary of Nimoy's life being worked up by his son and set to be narrated by "Star Trek" movie star Chris Pine.

Nimoy died of chronic obstructive pulmonary disease back in February.