Jimmy Carter Biographies Now in the Works! Get to Know the Former US President More 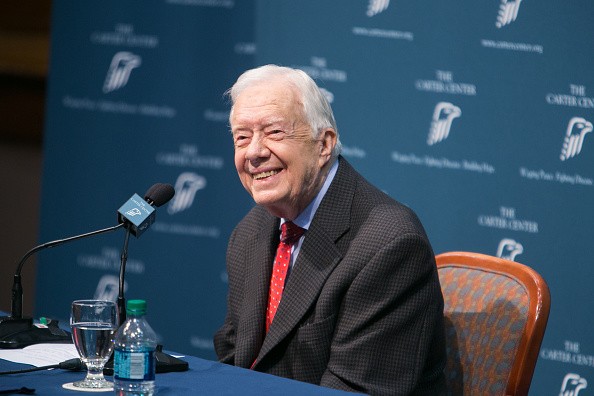 Jimmy Carter, the 39th president of the United States, is the subject of two biographies currently in the works.

According to New York Times, Pulitzer Prize winner Kai Bird, whose core expertise is on writing political profiles, has inked a deal with Crown Publishing Book to write the former president's biography.

Bird started working on the memoir earlier this year, according to the publisher, but no release date has been set yet. To put the book together, Bird will interview the members of his administration. He will also make use of unclassified documents tucked in the presidential library.

New York Times says that this will be the second time the award-winning author writes about the politician, who also happens to be a writer himself. The first time was way back 25 years ago when Bird penned "Mr. Carter for The Nation," describing him as "the very model of an ex-president."

Bird's latest work, "The Good Spy: The Life and Death of Robert Ames," was a New York Times best seller. "American Prometheus: The Triumph and Tragedy of J. Robert Oppenheimer," a 2005 biography he wrote n with Martin J. Sherwin hitched a Pulitzer Prize.

The second Jimmy Carter biography will come from Jonathan Alter. Cape Cod Times says that the 90-year-old Nobel Peace Prize awardee gives his "full cooperation" on the memoir, which will be published by Simon & Schuster.

In drawing up the biography, Alter has been working with Carter personally as well as his friends and his family since early this year. The biography has yet to get a title, but it is scheduled to hit shelves by 2018. In a statement picked up by Cape Cod Times, here is what Alter had to say:

"His presidency is only part of an epic story that spans three centuries, extending from a rural boyhood not much different than that of the 19th century, to a young adulthood in the vortex of the 20th century civil rights movement, to the frontiers of 21st century peacemaking and disease eradication."

Alter says that the book will look into the intricacies "of his stellar and inspiring character, shaped throughout by his religious faith." The author's most notable works include "The Promise: President Obama, Year One," "The Center Holds: Obama and His Enemies" and "The Defining Moment: FDR's Hundred Days and the Triumph of Hope."

Carter, who also penned 29 books including "A Full Life" published by Simon & Schuster, is set to undergo treatment for his brain cancer, which he announced last month.

Washington Post says that he held a recent lesson in Maranatha Baptist Church last Sunday. It is the second one he did after announcing his illness and it drew more than 1000 people at the church.