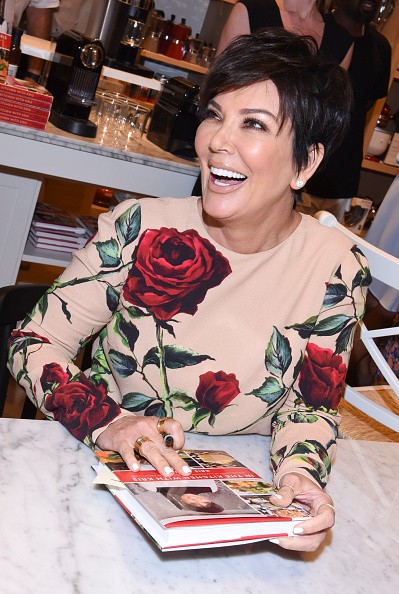 Kris Jenner autographed copies of her book "In the Kitchen with Kris: A Kollection of Kardashian-Jenner Family Favorites" during the reopening of the Williams-Sonoma store at The Commons, Pop Sugar reports. She was joined by her daughter Khloe, who was more than willing to pose for pictures with fans.

During the event, the "Keeping Up with the Kardashians" star showed off her culinary skills. In the kitchen of the newly-reopened store, Jenner cooked a dish from her cookbook and was seen deep-frying vegetables to her heart's content as she chatted with Williams-Sonoma president Janet Hayes, who sprinkled some pepper on the veggies.

Jenner's cookbook is a compilation of recipes the Kardashian and the Jenner clans share and love. But more than that, the "momager" as she was always dubbed, also drops her wisdom on all things gastronomic and foodie in the book, all while sharing stories about the family.

There are about 70 recipes in the cookbook, all of which having feared to be the stars of the household's dining table. Squeezed in between tips and guidelines on how to make the best-tasting chicken soup and cookie bars are photos and morsels of info about the Kardashians and Jenners.

Apart from these recipes, there are a lot of things previously unknown to fans that were dished out by Jenner in her cookbook. Express has provided a rundown of all this, starting off with what Jenner loves to do next to cooking for her family. "Some people paint, others make music and dance, I make table settings," she wrote.

Jenner, who also released her memoir called "Kris Jenner... And All Things Kardashian," also professed in the cookbook her massive love for china and dishes. She revealed she treasures the Hermès dishes her daughters gave her before managing to mention again her obsession with table settings.

She also talked about Jennifer Lopez's stove, which she thought was a "piece of art." Then Jenner gushed on her own refrigerator. She says that the machine "has a personality of its own" and that it should have an Instagram account too.

As mentioned, the only Kardashian to show up in the book signing is Khloe, which is very fitting as "In the Kitchen with Kris," she was the one Jenner voted as the "best cook in the family." She said that she realized this when she first got a taste of her fried chicken.