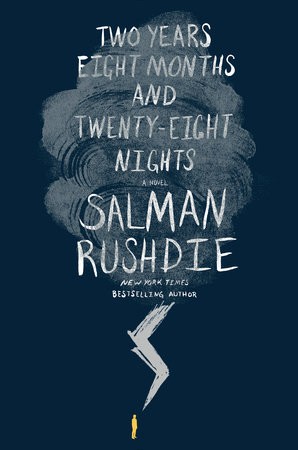 Salman Rushdie's novel "Two Years Eight Months and Twenty-Eight Nights" comes out this September, bringing a mix of magical realism and mythology in one fiction novel.

In his new book, he writes about a jinnia (known as genie) who falls in love with a mortal scholar. They soon produce children with powers and start a long line of powerful generations. The superpowers include hovering inches off the ground or making blemishes appear on guilty corrupt people.

Rushdie recently talked about his new book and his writing style when it comes to magical realism.

"Magical realism isn't just a fad -- it has been around as long as art has been," he told Huffington Post via email. "...It can intensify a reader's experience of truth, crystallize it into words and images that stay with one. That's the appeal."

He also mentioned the similarities between him and his central character, Ibn Rushd.

"Obviously there are echoes between Ibn Rushd's life and mine: persecution, book burning, similar ideas. But no jinnia in my life."

Despite being an atheist, Salman includes myth and polytheistic religions in his fiction. In an interview with New York Times, he explained the reason behind it.

"Ideas are interesting to me and religions are a place where ideas have been very subtly embodied for thousands of years."

Rushdie's skill in writing about the magical world can also be seen in his previous novels. His most recent young adult fiction, "Luka and the Fire of Life", centers on a young boy who journeys through the world of magic to save his brother from an eternal deep sleep.

With companions Bear, who is a dog, and Dog, who is a bear, he attempts to take the Fire of Life.

Another notable work of his is the novel "Midnight's Children", which also explores magical realism and history. The 1981 book won the Man Booker Prize and was selected as one of Modern Library's 100 best novels of all time.

Salman Rushdie has written eleven novels, four non-fiction books and one collection of short stories. He is also a Distinguished Writer in Residence at New York University.