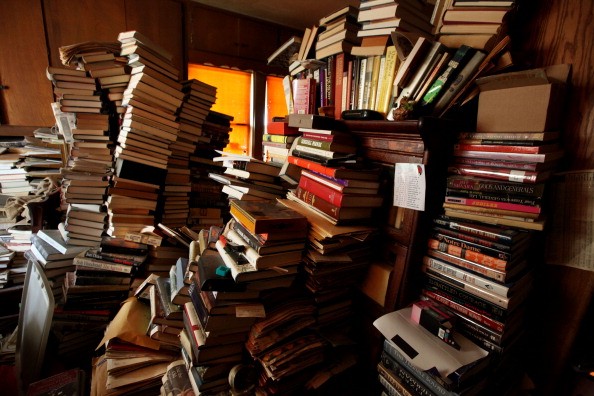 SAN DIEGO, CA - APRIL 8: Books sit stacked in a bedroom at a hoarders home in on April 8, 2011in San Diego, California. Martin's mother was a hoarder and recenty passed away leaving her son Greg and his wife Sidney to clean the place out.
(Photo : Sandy Huffaker/Getty Images)

The Kirkus Prize, known as one of the richest literary awards in the world, has released its list of 2015 finalists in all three categories: Fiction, Nonfiction and Young Readers' Literature.

The winning authors from each category are to receive $50000, which makes it among the most highly generous literary awards.

Kirkus Reviews serves weekly reviews to consumers, giving a sneak peer to the most remarkable books to be published. Founded in 1933, Kirkus has been giving services for more than 80 years.

Every book that has been reviewed and has earned a Kirkus Star from reviews are automatically nominated for the 2015 Kirkus Prize. In addition, the books must have been published sometime between November 1, 2014 and October 31, 2015.

According to the website, a Kirkus Star "is one of the most prestigious designations in the book industry."

The FAQs reveal that about 10 percent of all book reviewed earn the Kirkus Star, which is decided by the editor with the help of some reviewers.

Here is the list of finalists for Kirkus Prize for Fiction:

"The Incarnations" by Susan Barker
"A Manual for Cleaning Women: Selected Stories" by Lucia Berlin
"Fates and Furies" by Lauren Groff
"The Story of My Teeth" by Valeria Luiselli
"The Book of Aron" by Jim Shephard
"A Little Life" by Hanya Yanagihara

Here is the list of finalists for Kirkus Prize for Nonfiction:

"Between the World and Me: Notes on the First 150 Years in America" by Ta-Nehisi Coates
"Whirlwind: The American Revolution and the War that Won It" by John Ferling
"H Is for Hawk" by Helen Macdonald
"The Deluge: The Great War, America and the Remaking of the Global Order, 1916-1931" by Adam Tooze
"Pacific: Silicon Chips and Surfboards, Coral Reefs and Atom Bombs, Brutal Dictators, Fading Empires, and the Coming Collision of the World's Superpowers" by Simon Winchester
"The Invention of Nature: Alexander von Humboldt's New World" by Andrea Wulf

Here is the list of finalists for Kirkus Prize for Young Readers' Literature:

Kirkus' FAQs page further reveals that in judging children's and teen's book, finished art and design are also being considered as it affects the full effect of the book to its readers.

Picture Book:
"The New Small Person" by Lauren Child
"Lillian's Right to Vote: A Celebration of the Voting Rights Act of 1965" by Jonah Winter; illustrated by Shane W. Evans

Middle Grade:
"Echo" by Pam Muñoz Ryan
"Funny Bones: Posada and His Day of the Dead Calaveras" by Duncan Tonatiuh

Teen:
"The Game of Love and Death" by Martha Brockenbrough
"Shadowshaper" by Daniel José Older

The panel of judges include respected writers, booksellers, librarians and Kirkus critics. The will be announced on October 15, 2015.