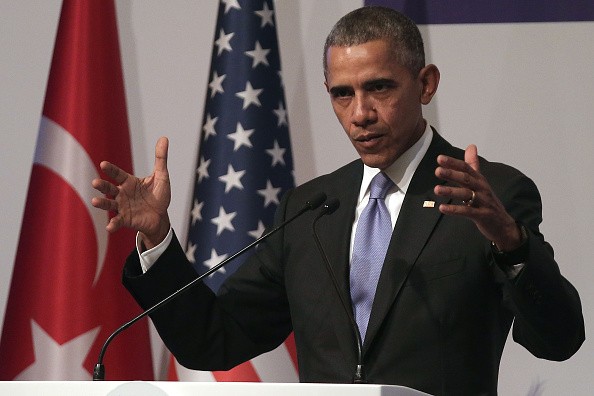 ANTALYA, TURKEY - NOVEMBER 16: U.S President Barack Obama speaks to the media during his closing press conference on day two of the G20 Turkey Leaders Summit on November 16, 2015 in Antalya, Turkey. World leaders will use the summit to discuss issues including, climate change, the global economy, the refugee crisis and terrorism. The two day summit takes place in the wake of the massive terrorist attack in Paris which killed more than 120 people.
(Photo : Chris McGrath/Getty Images)

David Bernstein's book "Lawless: The Obama Administration's Unprecedented Assault on the Constitution and the Rule of Law", a scathing analysis of the Obama administration, was released on Nov. 17. According to Forbes, the book "covers many of the instances where Obama and/or his subordinates refused to let the law get in the way of doing whatever they wanted."

George Leef, in Forbes, quoted Bernstein, "There has never been a greater gap between a presidential candidate's constitutional promises and his actions in the Oval Office."

Leef reacted to this saying, "We have suffered through a lot of imperial presidencies before, but I think Bernstein is right. On respecting the rule of law, Obama is the worst ever."

Bernstein listed on The Volokh Conspiracy Blog what he perceives to be the Obama administration's top five transgressions in terms of following the rule of law, though he admits that the list is subjective. He cites (1) the bombing of Libya, (2) the president's supporting of a voting role in the House of Representative in 2009, (3) the bailout of Chrysler and General Motors, (4) the 501(c)(4) Scandal and (5) the controversial changes in procedures for sexual assault cases in universities.

Moreover, Bernstein made special mention of the controversial Affordable Health Care act and its provisions.

"Here he has undertaken a large but important task, and we should be grateful that he has performed it so thoroughly," Mark Pulliam, reviewing Bernstein's book for Library of Law and Liberty, wrote. "Many of the book's examples of administration misdeeds have been reported elsewhere, but having them in a single volume (with extensive accompanying footnotes) creates a shocking indictment of the Obama presidency."

Commenting on the value of Bernstein's book and how it can contribute to the landscape of American politics, Leef wrote on Forbes that the book can help "spark that conversation." Leef said that in the presidential debates, knowing where each candidate stands on the issue of rule of law, whether they intend to restore it or undermine it, would be illuminating

He is a contributor to the legal blog Volokh Conspiracy blog and he has written numerous scholarly articles. His other books include "A Conspiracy against Obamacare: The Volokh Conspiracy and the Health Care Case," "Rehabilitating Lochner: Defending Individual Rights against Progressive Reform" and "The New Wigmore: Expert Evidence."