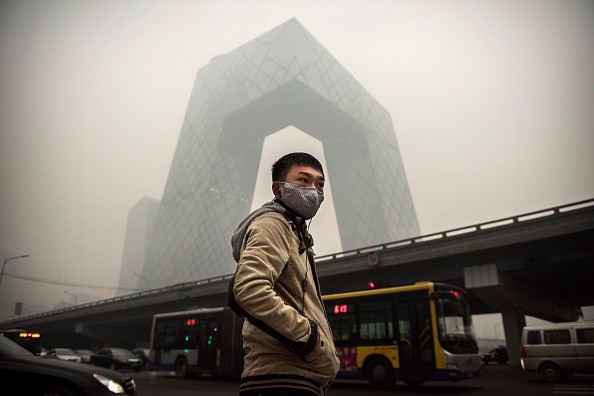 BEIJING, CHINA - NOVEMBER 29: A Chinese man wears a mask as he waits to cross the road near the CCTV building during heavy smog on November 29, 2014 in Beijing, China. United States President Barack Obama and China's president Xi Jinping agreed on a plan to limit carbon emissions by their countries, which are the world's two biggest polluters, at a summit in Beijing earlier this month.
(Photo : Kevin Frayer/ Getty Images)

Li Yuanchuan, the environmental protection deputy chief of the city of Langfang in the Hebei province in China, has used novels to raise awareness about the perils of air pollution. "The Pains of Smog," which is the second book of a smog-themed trilogy, is set to be published soon. The first book in the series "Smog is Coming" was released in 2014 and sold more than 30,000 copies.

For his first novel "Smog is Coming," the story begins with the main character Lu Zhengtian, a county environmental official arguing with his superior about allocating the budget intended to clean up the air to construction projects. Lu exclaims, "The air quality's so bad, the smog's so thick - we can't put our careers before our lives!"

The recurring theme of "Smog is Coming" is about a constant struggle with bureaucracy and the frustrations of ordinary people. According to a report originally published in China Youth Daily, Li carefully laid out the fates of his characters though he thinks that the portrayals of their struggles are not too far from reality.  "Leaving aside its literary merit, many of the events in this book are realistic and reflect the realities of environmental protection work," says He Zhen, an employee at the Jiangsu provincial environmental protection office.

Langfang, together with six other cities in Hebei have been listed as some of the top 10 most polluted cities in China according to an article originally published in the Tea Leaf Nation. Langfang is located midway between the capital Beijing and Tianjing, around one hour away from Beijing Capital International Airport. Its economy is centered on computers and technology

According to a report by The Guardian, scientists at the University of California Berkeley released a study that calculates that the air pollution in China is killing around 4,000 people a day, or around 1.6 million people a year, due to heart and lung complications and stroke. The study says that coal emission is the primary culprit for the polluted air.