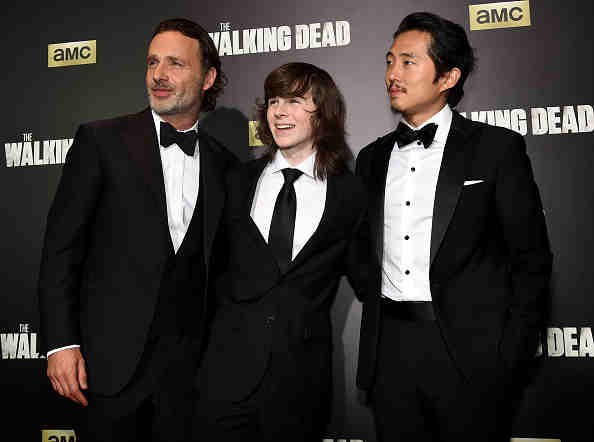 The midseason finale of "The Walking Dead" upon fans and rumor has it the hit post-apocalyptic show is going big on its source material. New reports suggested that in episode 8 titled "Start to Finish," a familiar disaster in the comics by Robert Kirkman will be depicted in the show.

Word on the street is that the series is setting the stage for Carl's infamous disfigurement. As IB Times recounted, in the comics, Rick's son was accidentally shot in the eye after Douglas Monroe -- Deanne Monroe in the show -- blindly discharged a barrage of bullets to knock down the walkers.

Although Carl survived the gunshot, he lived the rest of his zombie-laden life without his right eye functional. For a while now, it is being reported that this very moment will take place very soon in "The Walking Dead" season 6.

But instead of Douglas Monroe's series counterpart Deanne blinding the lad, it will be in the hands of Ron, who in the previous episode, has become a little bit too eager to learn how to shoot. Rick and Carl taught him but the lesson was cut short, thanks for his strange enthusiasm.

Ron has all the intentions in taking down Carl and even Rick, looking at the bad luck he suffered so far in "The Walking Dead" season 6. The latter killed his dad and the former is close to having Ron's girl Enid fall in love with him. But his attempt to kill them will not go the way he planned.

Judging by his lack of shooting experience, he would do damage not as massive as death but rendering Carl's right eye useless, which is a big thing nonetheless. Whether or not it will take place anytime soon remains to be seen.

Meanwhile, The Spoiling Dead Fans, which is always reliable when it comes to "The Walking Dead" spoilers, has provided a rundown of the next episode. At the moment, the latest info that the fansite has do not suggest such will happen.

Back in August, the site claimed that, for the upcoming "The Walking Dead" season 6 episode, Sam will be eaten and Jessie will try to save him until Rick chops her arm off when walkers started to attack her. Jessie eventually dies.

This enraged Ron, who quickly aimed to shoot Rick. Carl jumps to save his dad, getting shot in the eye in the process. Michonne quickly kills Ron.

While The Spoiling Dead Fans claims that "Start to Finish" will not feature such moment, it said in its latest post that it could happen in episode 9 instead. As for episode 8, the fansite teases that for the first time, "The Walking Dead" will mention the name of the cult-favorite comic book villain Negan, who will be played by Jeffret Dean Morgan.