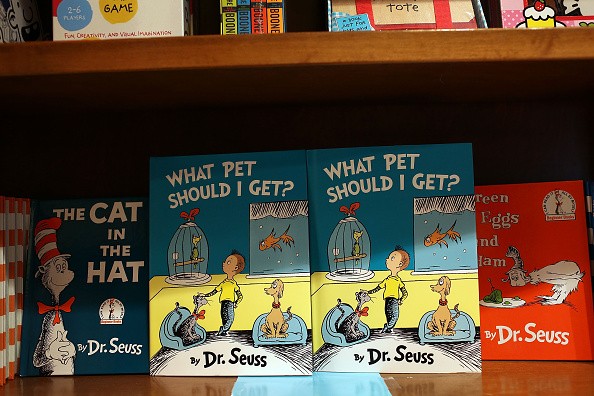 CORAL GABLES, FL - JULY 28: Dr. Seuss' never-before-published book, 'What Pet Should I Get?' is seen on display on the day it is released for sale at the Books and Books store on July 28, 2015 in Coral Gables, United States. The manuscript by the author Theodor Geisel is reported to have been written in the 1950s or 1960s and stashed away in his office until his widow found it in 2013.
(Photo : Joe Raedle/Getty Images)

Research psychologist Chris Westbury may have finally cracked the code behind the unfailing humor of famous writer and illustrator Dr. Seuss. Well, it apparently involves funny-sounding words like "snunkoople," which always made participants on his research for aphasia (a type of language disorder) burst into laughter upon reading it.

When his aphasia study ended, Westbury turned his attention to answering a new-found question about what makes the said word funny. He tried to figure out the resolution by using 19th century German philosopher Arthur Schopenhauer's incongruity theory and some head-spinning mathematics.

The aforementioned theory suggested that things become comical when they turn out to be something an individual does not expect. As per Independent, this concept could be applied to words and terms too, like how readers let out a chuckle when encountering the word "oobleck" while flipping through one of Dr. Seuss' books.

To fully determine what makes "The Cat in the Hat" author a killer wordsmith, Westbury mixed up Schopenhauer's idea with that of information theorist Claude Shannon, who has found a formula to determine how much disorder there is in a statement.

The trick is to make up a word with odd letter mishmash like the beloved writer's very own invented terms "truffula" or "sneetch." The idea is that the greater the disorder in the word, the more they should become funnier. Indeed, that is what the participants in Westbury's research felt after being shown random words, some became even more "disordered" than the others.

Westbury ultimately found out that, before an individual chortles, they actually do what he called an "unconscious calculation" where they establish whether or not a certain situation or a word is out of line or something that defy what they anticipated.

"They're going on their gut feeling, going 'It feels funny to me.' And we're showing that feeling is actually a kind of probability calculation. ... Emotion is helping us compute the probabilities in the world," Westbury explained.

Westbury's research, all in all, is called the "quantifiable theory of humor" and it is billed as the first of its kind. However, he admitted it isn't the first to delve into the subject of what makes something funny. Researchers have apparently been trying to find the answer since the 1920s.

In a nutshell, Westbury believes that Dr. Seuss knew very well how to go against the expectations of his readers and this could be the explanation why his "The Lorax," "Oh, the Places You'll Go" and pretty much all his writings never fail to make readers cackle.

Westbury will publish the entirety of his study in the next month's issue of Journal of Memory and Language. As readers wait, they can idle away the hours by checking out the writer's posthumous work "What Pet Should I Get?" The Guardian reviewed that the book "slots effortlessly" with Dr. Seuss' exquisite shelf.