Unmasking the Secrets of ‘Fifty Shades of Grey’(Video) 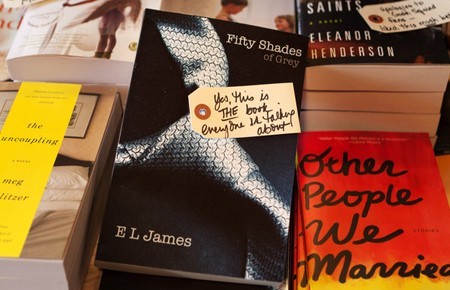 For every person that quipped "Anyone could write this crap!" after reading "Fifty Shades of Grey," you can give yourself a nice little whip on the back. You were right.

For proof, look no further than Brian Brushwood and Justin Young. The hosts of the NSFW podcast, have a $0.99 novel at #4 on the iTunes Top Paid Books chart, and they didn't write a single word of it. The secret to their publishing success is as depressing as it is obvious: Lots of bad writing, and lots, and lots of sex.

And indeed they did. The writing team drew their inspiration from the 1969 novel "Naked Came the Stranger," a hoax masterminded by 24 journalists who filled the novel to the brim with sex, "bad" writing, sex, utterly meaningless dialogue, inconsistent plot, and more sex. It was meant to be a commentary on how intellectually bankrupt popular American literary culture had become, and it became a New York Times bestseller. Sound familiar?

So there it is. The secret's behind a bestseller: A cover that looks like "Fifty Shades of Grey," gratuitous sex, and characters with jobs that are extremely trendy.

Frankly, unlike "Fifty Shades of Grey," "The Diamond Club" did have help getting to the top, and once it got there, people kept buying it because it was there. So, we have no way to discern between people who bought it for science, and people who bought it because they wanted something to read with their new collection of scented candles. Either way, the one-star reviews seem to be coming from people who were genuinely disappointed at the "chapter after chapter of porn stories," and "rambling incoherent mess," so there are definitely some readers out there who were duped. It seems like most people buying "The Diamond Club" don't even realize it's a hoax. Here's an excerpt from one iTunes review:

"''The Diamond Club' Really pushes the boundaries of female sexuality. I'm only about a quarter through it but so far its great! Though it reminds a lot of the 50 shades series at times. Its made me feel a bit dirty at times but it's strangely kind of liberating. So far a great read. You won't be disappointed.'"

Lucky for me, I'm in the middle of completing my new erotica series right now about a trillionaire vegetable pickling magnate in Boston named Hyrem J. Pulaski who trains for 20K runs when he isn't sexing up impressionable, demure lasses in his "pleasure dungeon." Look out iTunes.