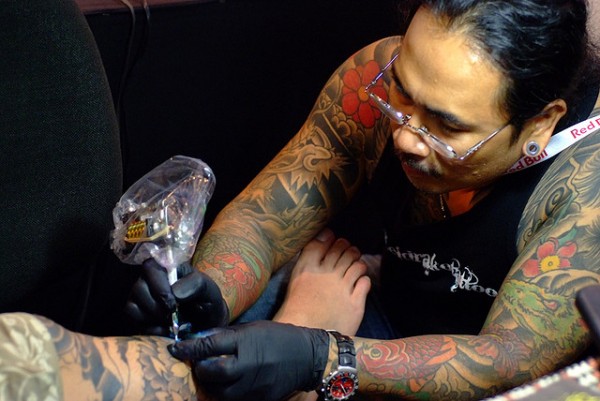 Your parents always told you to be an upstanding citizen. Remember? "Respect your elders. Get a job. Don't get tattoos - they're dangerous. Sit up straight. Quit tickling that goat, he doesn't like that," and so many other platitudes, blah, blah, blah ... Well, it turns out they might have been onto something. According to a report released by the Center for Disease Control this week, getting a tattoo can be more dangerous for your health than you might think.

Last fall when a cluster of skin infections in upstate New York led back to one tattoo artist, local public health officials reacted normally, investigating the artist's hygiene practices. They found that all of his equipment and methods were sanitary, but the nationally distributed ink he had been using on patrons, even in unopened bottles, was not.

Soon after, similar investigations in Colorado, Washington and Iowa turned up harmful strains of bacteria in three other brands of tattoo ink. According to research reported Wednesday in the New England Journal of Medicine, at least 22 skin infections across the four states were linked to contaminated ink.

Mycobacterium chelonae was found to be offender in the New York outbreak, a relative of the bacteria behind tuberculosis and leprosy that is commonly found in tap water. Though M. chelonae is usually harmless to people with normal immune systems, when it's escorted beneath the skin by a tattoo needle, it can cause a very painful rash that can last for months on end, requiring strong antibiotic regimens and sometimes even surgery to eradicate.

According to the Centers for Disease Control and Prevention (CDC), past tattoo-related Mycobacterium infections likely arose from the use of unsterile water as a diluting agent in ink. And because the ink that caused the New York outbreak was "gray wash," pre-diluted black ink used for shading, the CDC has speculated that its manufacturer may not have been using sterile water.

Is there any way to be sure that a given manufacturer's tattoo ink is sterile? The answer is a definite no.

Currently, there is no FDA regulation requiring that tattoo inks be sterile, so a consumer has to trust a company's or an artist's word on that one. It is also worth noting that although a number of the color pigments used in tattoo ink have been approved by the FDA for use in cosmetics, not a single one has ever been approved for injection into the skin.

Further, there is not good data on how often tattoo-related skin infections occur, because reporting is voluntary, but if one decides to play the odds and join the millions of Americans who already have tattoos, there are a few precautionary steps that he or she can take to decrease the chances of an infection.

The CDC recommends that a consumer only use tattoo parlors registered by local jurisdictions, and request inks that are manufactured specifically for tattoos, along with "watch-dogging" artists during tattooings to ensure that they use sterile water for dilution and cleaning. If an infection does occur, the CDC advises seeking medical advice and notifying the tattoo artist as well as the FDA's Medwatch program.

"Watch-dogging", aye? Sounds like a pretty badass idea for a new tattoo to me.