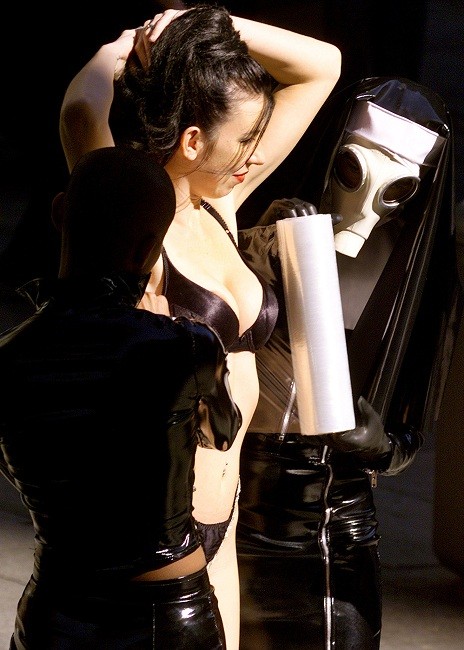 A woman is wrapped from head-to-toe in plastic by two collegues wearing leather outifts and gas-mask.

It's official: "Fifty Shades of Grey" has permeated every conceivable crack of human existence. But, then, you don't sell 32 million copies of a book without some sort of cultural shift happening. The books - "Fifty Shades of Grey," "Fifty Shades Darker," and "Fifty Shades Freed" - have been on the New York Times bestseller list for 30 weeks. And now we have even more stats to prove the book's influence.

A spokesman for the site said they were able to compile the data using analytic software that could tell which geographic area searches came from.

The news doesn't come as a surprise to people who are embedded in New York's kinky community.

"The gay pride movement really took force in New York," Sanders said. "New Yorkers are progressive sexually and open sexually and have a tendency to lead the way."

"It's definitely going to trickle down, but it will take a while," Blaze said. "It's going to take telling people that there are safe, sane, consensual places where you can learn and you don't even have to do anything."

"I think that some will [eventually participate]," Sanders said. "But you always find that people watch things that they would never do. People like watching gang bangs, but they never really think about doing it themselves."

Susan Wright, a spokesperson for the advocacy group National Coalition for Sexual Freedom says, "I've been tracking media for the past 17 years for NCSF and there has never been any kind of reaction like this before. Look at what a brilliant stonewall this is: Twilight fan fiction to open the conversation."

But not everyone is so thrilled with the popularity of "Fifty Shades of Grey" -- especially professional romance and erotica writers.

Still, some authors in the genre are able to put aside Fifty Shades of Grey's literary shortcomings to praise James for helping expand the genre - whether that's erotica or romance. "The Fifty Shades phenomenon is a natural outgrowth of what is almost 35 years of tremendous growth in romance fiction and a tremendous growth in women's fiction," says Amazon best-selling author Cerise DeLand (Rope Me In, At Her Service). "I think that the reason it is doing so well is attributed to a marvelous publicity campaign that got the word out in a big way. And the packaging was subtle, those who bought the book in print format [felt] as though they were able to do so and take it to the doctor's office and read it with impunity, which has always been a huge challenge for women reading romance."

What do you think? Does this mean we're on the precipice of a new sexual revolution? Does this mean everyone's experimenting more? Does James need to read up on grammar -- BDSM-related and otherwise?