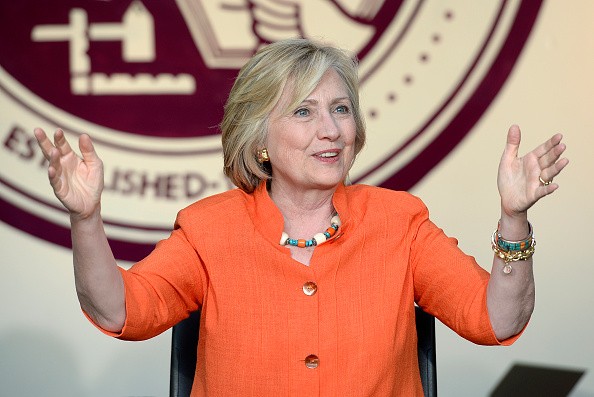 Hillary Clinton is getting a picture book, filled with amazing illustrations of her greatest moments and inspirational words to live by. Simply titled "Hillary," the book, Mashable says, chronicles her journey from being a humble girl from the suburbs of Chicago to a presidential candidate.

In between the artworks are pieces of advice, all encouraging and helping its readers to stand up and make the world a better place regardless of where and what they are right now. It has quotes on how to bounce back after being brought down, ignore what others say and the need for equality between all genders.

The picture book is more of a middle-grade title. As per Bustle, even those who aren't full-fledged supporters of the former First Lady of the U.S. can pick it up for the motivational words inscribed on its pages, basically because these are things children ought to learn.

"Hillary" is authored by Jonah Winter. "If you're going to run for president, you must be strong, you must be tough, you must be competitive," Winter writes in the picture biography as quoted by Mashable. The author from Texas has always told different stories in and out of politics in his colorful, unique way.

In fact, Winter also created a picture book memoir and tribute for US President Barack Obama back in 2008, which became a New York Times bestseller. He collaborated with AG Ford for that one. He also told the stories of sports superstars and the world's greatest life-changers in pictures, as shown on Simon & Schuster's website.

According to Bustle, for "Hillary," Winter partnered with illustrator Raul Colon for the illustrations. Colon is not new to the job, having illustrated a flurry of life stories for kids. These include "My Name Is Gabito," "Roberto Clemente: Pride of the Pittsburgh Pirates" and "Annie and Helen."

No concrete info on what the 40-page book will cover. Echoing some of Clinton's fans' hopes, Bustle says it will be a thousand times lovelier to read about the Secretary of State's tales from Wellesley College and Yale Law School as well as that time she wrote to NASA in a bid to know how one becomes an astronaut.

"Hillary" won't hit the shelves until next year. It will officially be out five months from now, January 5 to be exact. There will be an e-book version of the picture memoir releasing on the same day as well.