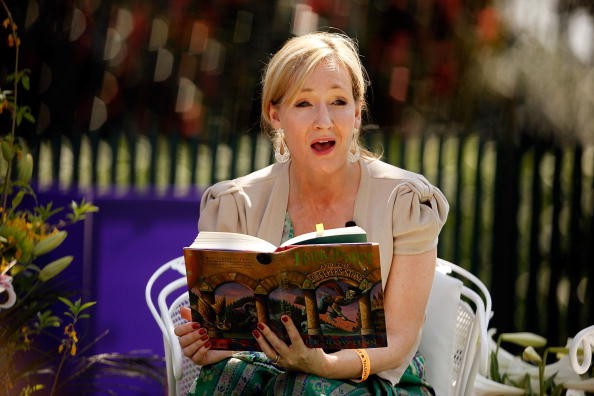 WASHINGTON - APRIL 05: British author J.K. Rowling, creator of the Harry Potter fantasy series, points to the place on her forehead where her title character has a scar while reading 'Harry Potter and the Sorcerer's Stone' during the Easter Egg Roll on the South Lawn of the White House April 5, 2010 in Washington, DC. About 30,000 people are expected to attend attended the 132-year-old tradition of rolling colored eggs down the South Lawn of the White House.
(Photo : Chip Somodevilla/Getty Images)

More details about the much-awaited Harry Potter spinoff, "Fantastic Beasts and Where to Find Them," continue to spill, with the latest one coming from JK Rowling herself. In one of her Twitter sessions, she managed to drop a morsel of info.

In a tweet, the bestselling author felt like fans needed a dose of "Fantastic Beasts" after cheering for the Scotland rugby team's in its match against Ireland. She tweeted a trivia that involves Porpentina and Queenie's family background.

Well, I think it's widely known that that characters of (Porpen)tina and Queenie are sisters, but not that their surname is Goldstein.

As reiterated by Entertainment Weekly, Porpentina or Tina is an American witch that magizoologist, Newt Scamander, meets during his journey to New York. She later becomes his wife. Queenie is Tina's younger sister. As reported by Books N Review, "The Theory of Everything" star Eddie Redmayne will play Newt, who embarks on a quest to find and identify mystic beasts. Tina will be played by Katherine Waterson while Alison Sudol was tapped to play Queenie. It did not take long before questions poured in about this revelation. One fan asked if the sisters are in any way related to Anthony Goldstein, a wizard and a Ravenclaw student at Hogwarts. Rowling tweeted that they are, but it's "distant." In other related news, Rowling also made her every second online worth it by giving advice to fans in pursuit of a dream of creating new worlds and stories as writers. She had a lot to say about it as she herself had to work hard to get to where she is now. In answer to a fan whose dream is to become a writer but her parents do not think it is a "worthy profession," Rowling told her not to give in and give up.

Do what I did: pretend you want to do something else and write on the sly until you're free to do whatever you want! https://t.co/rgWiQq3H7H — J.K. Rowling (@jk_rowling) August 15, 2015

During her interviews, Rowling has been giving advice to those who dream the same dream as hers. In an interview with USA Today, she said, "If you love something - and there are things that I love - you do want more and more and more of it, but that's not the way to produce good work."

However, she likes to remind everyone that it isn't all about the work or the success. On Harvard Magazine, she stated that "Personal happiness lies in knowing that life is not a checklist of acquisition or achievement. Your qualifications are not your life."

"Fantastic Beasts and Where to Find Them" hits the theaters